Racing Commission to rule on ex-steward 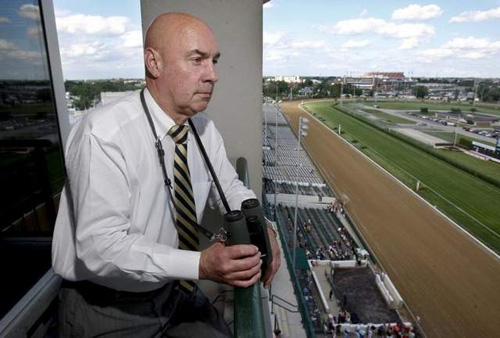 Gregory A. Hall | The Courier-Journal

LEXINGTON, KY. — A state hearing officer issued a report Wednesday supporting charges filed by the Kentucky Racing Commission against its former chief steward, John Veitch, in connection with a racehorse controversy during the 2010 Breeders' Cup at Churchill Downs.

The hearing officer, Robert Layton, recommended a one-year suspension of Veitch, who was fired from his job last month. A suspension could affect Veitch's chances of finding another job as a steward.

The case arose after Life At Ten, the bettors' second choice in the 2010 Ladies Classic, ran sluggishly after her jockey told a television interviewer before the race that she was not warming up normally.

Her last-place finish raised questions about whether the stewards had acted appropriately to protect bettors by allowing the horse to run.

Layton's ruling is a recommendation to the commission. It's not known when the panel will make a final ruling, which can be appealed in court.

Veitch's attorney, Tom Miller, said that they were "disappointed" in the outcome and that testimony supporting Veitch's version of events was ignored.

"I think John's explanations were totally consistent with the testimony of the other people involved," Miller said.

Veitch has denied doing anything wrong. But Layton's report was sharply critical of the former chief steward's performance.

Layton said Veitch showed "gross negligence" in not informing on-track veterinarians of the jockey's comments and by not having the horse drug-tested after the race. He also waited a couple days to investigate the matter.

The report said Veitch's version of events, and whether he heard the jockey's comments, shifted during the course of a state investigation that followed, and during a three-day hearing last summer at which Veitch testified.

Layton said changes in Veitch's story were "deceptive and self-serving."

The decision not to notify on-track veterinarians was "inexplicable," Layton said. He noted that Veitch testified that he looked through his binoculars at Life At Ten warming up after he heard the television coverage.

The report said state racing rules require a steward to notify a veterinarian if there are questions about whether a horse is fit to run.

It also said post-race blood and urine collection was necessary to determine why Life At Ten failed to perform normally. Layton said that's a duty of the chief steward, and he referenced a racing commission requirement that stewards "shall" investigate horses whose performance is abnormal.

The report said Veitch's failure to act means "the public will never know if there were any acts surrounding this race which violated racing's integrity."

It said the recommended penalty was based on the absence of proof that Veitch's conduct was malicious.

"Although his failure to act before the race is grossly negligent and harmful to the purpose of the commission, there was no proof that he was taking part in an intentionally corrupt scheme," Layton wrote.

Veitch was fired last month by state Public Protection Secretary Robert Vance, who declined to comment Wednesday on that firing.